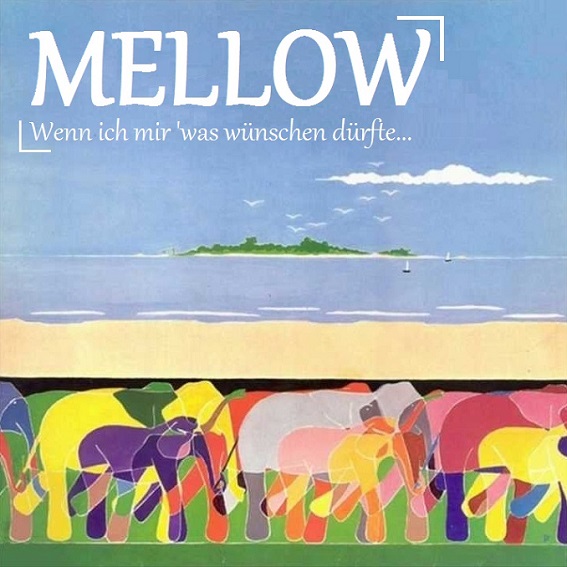 I hope everybody out there is good. It's been quite a while. To be precise two years. Unfortunately, that seems to be my fashion. A lot has been going on lately. Not enough to have an excuse of not updating my blog though. ''Mellow (Wenn ich mir 'was wünschen dürfte)'' is a mix I made for my sister. She asked me for a new compilation of music she could play at work, for breakfast or on a lazy Sunday...

After a little intro Can't Shake It from Andres a.k.a. DJ Dez sets the vibe for this mixtape: Feeling Summer! ''Can't Shake It'' is the perfect sound for a convertible ride, any time and part of the city, preferably summer. Andres, as someone commented on discogs, ''is standing on the boundary of deep house, funk, downtempo boogie and hip hop. He occasionally wanders off from the intersection to any side of the country, only to return to the border lands again.'' On track #3 we have Everyday Life by Leston Paul, a ''Trini Balearic proto-house jam'' - as quoted by Invisible City Editions. I think fell in love with this song when I first heard it a few years ago on a Red Light Radio mix by Tako. ''Everyday Life'' really shows off the full force of Leston Paul's musicianship. Playing all of the instruments himself, he leads us on a journey, starting with a classic 80’s bass, and drum machines that lay the foundation for a particularly spectacular steelpan jam. Originally released on the album Keys To The City, ''Everyday Life'' can also be found on the Light Sounds Dark bootleg (!?) release from 2015, alongside a few more nice rare tracks. On track #4 we have the b-side/version of Little Kirk's Ghetto People Broke, another song which I first got introduced to via Tako's above mentioned Red Light Radio mix (check out Resident Advisor's brilliant feature Playing Favourites: Tako Reyenga for more ''peeks inside the record collection of one of Europe's foremost diggers''). You can find the original of ''Ghetto People Broke Version'' on Little Kirk's '85 album Ghetto People Broke - as well as on a not so recent anymore French repress of this impossible to find digi showcase LP. Killer! Little Kirk, the older Brother of Beenie Man, released a whole heap of amazing digital tunes in the mid- to late 80ies before becoming a soulful almost R&B styled crooner singing Gospel. I am really feeling those 80ies early 90ies b-side and ''instrumental'' cuts - the synths, the minimalism or even ambientness, the insistent pulse of drum and bass, scattered and shuffling percussion, the sparness, a certain rawness and sometimes shards of vocals - and all the time being uncompromisingly electronic. And these riddims have swing & bump. Some Detroit Techno/House & or even Acid House tunes spring to mind. I am STILL working on a compilation of some of my favourite deegeetal (digital) riddim ''versions'' and b-sides. More Reggae on track #6: Sonya Spence's Let Love Flow On. Ace Jamaican soul stepper and Boogie jam with some x-tra feel good vibes. And bass. Mellow bubbling bass. This song has been rocking quite a few dj sets and dancefloors in the last few years. Get it in superb sound quality on Jeremy Underground's BEAUTYful Beauty compilation. On track #8 we have yet another Reggae song: Jimmy Cliff's Higher And Deeper Love. But just like Sonya Spence's ''Let Love Flow On'' - not everything Reggae is Reggae. Higher And Deeper Love is a... R&B tingled Lovers Rock jam. Released on Jimmy Cliff's own Cliff Sounds and Films label. On track #15 we've got Chief Inspector by Wally Badarou. Inspector Norse by Terje. ''Chief Inspector'' by Wally Badarou. Two inspector songs with an undeniable connection. Pure eargasm. Both songs. Or as someone on youtube put it: ''I paused my porn to listen to this, but I didn't stop masturbating''... ''Chief Inspector'' never fails to bring smiles to people's faces. I chose the Vine Street mix to highlight Island Records's Paul 'Groucho' Smykle, who can usually be found engineering/remixing Island Record's 12inch mixes - the tracks with the greatest dancefloor power. CLASSIC Moog bass, Linndrum with extra added percussion. Check out the percussion solo that begins around 2:36. Worth the price of admission alone. Paul 'Groucho' Smykle seems to be something of a mysterious character. I don't think I have ever seen a photo of Groucho. But I remember him for a lot of deeper than deep Island Records 12inch mixes and remixes. Sophisticated mixes that were different, more nuanced imho, than a lot of the others that seem to get much more credit. Check this interesting interview with him on Red Bull Music Academy - as well as this little write-up and mix by Test Pressing's Dr Rob. Great stuff! Beside being a skilled audio engineer, Groucho also designed album covers. Check here, here, here and here for some of his album cover artworks. One last track which deserves some special mention is track #17, Don't Judge Me Bad from Senyaka, which just got released on a nice 12inch on Rush Hour. ''Don't Judge Me Bad" is a 1987 upbeat yet melancholic soulful disco/house groover that draws influence from boogie, AOR rock and jazz-funk. Over a driving 4×4 drum machine beat, the chugging staccato guitar and tender synth chords lay a gentle bed for Senyaka’s heart-felt vocal. Pure Summer vibes! I just got the 12inch in the mail - and I should probably get another copy before I wear this one out. Really love it - and really love what Antal (check out Resident Advisor's The art of DJing: Antal) and the Rush Hour connection from Amsterdam are doing. They have been on fire lately. Also watch out for the fortcoming Rush Hour compilation Various - Pantsula! The rise of electronic dance music in South Africa. What am I supposed to say?! An album ''full of late 80s South African dance floor winners only''... Each song a bomb! ''Selected by DJ Okapi (the man behind the great Afro-Synth blog) and Antal, the compilation holds tracks by Jivaro, The Hard Workers, Ayobayo Band, S.Y.B. & many more. This is the sharp electronic music that fuelled the local Pantsula dances during the 80s and 90s. A must have for fans of Bubblegum and Kwaito music. TOP TIP! Read the rest of review here...

Now hit the DL button before it gets deaded & don't forget to leave a comment if you enjoy this compilation. Hopefully I will be back with another mix in a few weeks.

P.S.: ''Wenn ich mir 'was wünschen dürfte'' is German and can roughly be translated as ''If I'm allowed a wish'' in English.
Posted by DubMe at 1:46 AM

Please let me know if you don't like your music being here. I will immediately remove it.

Sharing is caring. Email me your mellow wants and I'll hook you up in style.

Support the original artists:
buy their music & go to concerts.

Thanks for all your comments;
they're really appreciated.